Amid many Republican wins and charts that show Democrat Party stealing votes through machines and early voting ballot fraud, children continue to drop dead. “No Explanation.”

Example of likely machine based steal: 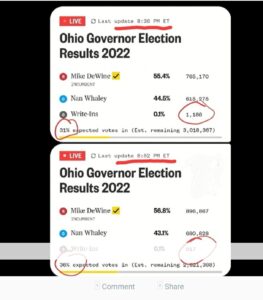 Hotly contested school board elections, unaccountably, see the anti-porn candidate lose. I would have expected that even given the vote splitting extra candidates, the new wave would have won. Never before was there any interest. So, where did the establishment votes come from? Not from Travis county! Not from any neighborhood that we know about. Not from any group we know about. Hmmm.

This site uses Akismet to reduce spam. Learn how your comment data is processed.